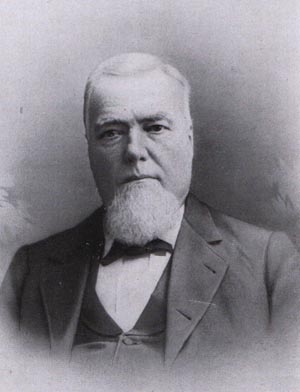 James Winston was born in Richmond, Virginia on August 28, 1824. Winston was a graduate of the University of Virginia at Charlottesville. After graduating college, Winston took up the position of Deputy Sheriff and Deputy Circuit Clerk in Carthage, IL, where he held this position until 1865. Immediately after leaving Carthage, Winston was admitted to the bar and relocated to Springfield, IL, where he was recognized as a “staunch democrat”. Winston was “prominent in political circles, his opinions carrying weight in the councils of his party.”Winston worked as Deputy Clerk to Circuit Clerk Charles H. Lanphier, and then served as Circuit Clerk of Sangamon County for 8 years, from 1872-1880.

Winston was elected as comptroller of Springfield in 1880, which caused him to leave his post as Circuit Clerk.  Winston was Comptroller for one year. A few more changes in occupation occurred throughout the years as Winston was then appointed Chief Clerk for an Illinois Revenue collector in the Springfield Revenue office. After this, Winston was made clerk of the U.S. court in the Indiana Territory.

James Winston was married to Harriet Baker and the union resulted in 10 children, one of whom was named Charles Lanphier, after Charles H. Lanphier, Winston’s former boss and mentor. Winston was respectfully referred to as an “influential citizen and a representative political leader” by author Joseph Wallace in Past and Present of City of Springfield and Sangamon County, IL.